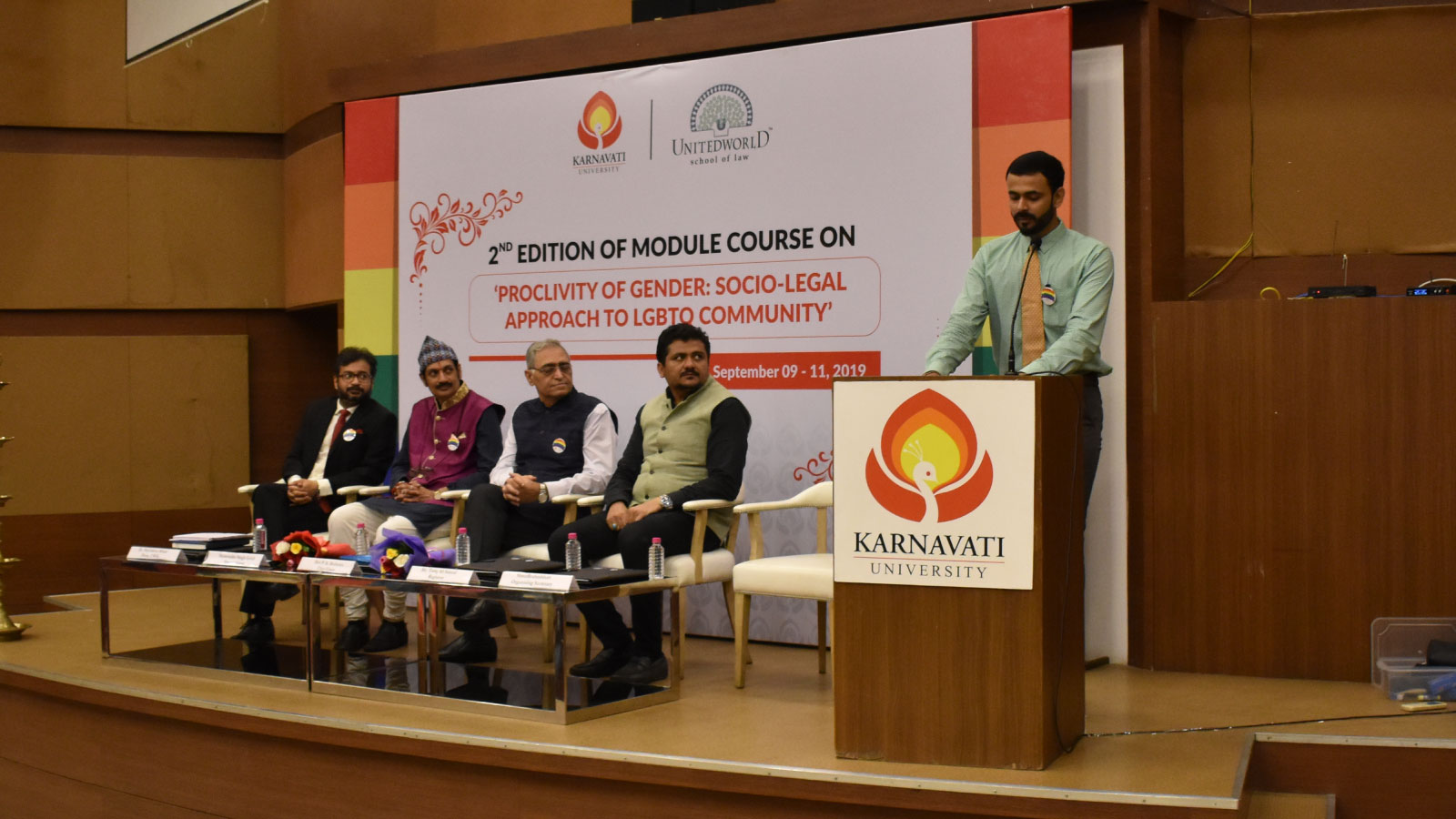 “Law Has Changed, But Has Our Society Really Changed?”
Unitedworld School of Law (UWSL), Karnavati University conducted the second edition of its, One of its kind in South-east Asia, Module Course on ‘Proclivity of Gender: Socio – Legal Approach to LGBTQ Community’ on September 09, 2019 at its campus. The Course is being conducted by Prof. Shrut Brahmbhatt, Assistant Professor of Law, UWSL as Organizing Secretary.

The course is being organized under the patronage of Shri Manvendra Singh Gohil, Social Activist and First Openly Gay Prince in the world. The inauguration of the course was done by Shri P. K. Malhotra, Former Law Secretary, Ministry of Law and Justice, Govt. of India as Chief Guest.

After the inaugural ceremony and the welcome speech from Dr. Nachiketa Mittal, Dean In charge, UWSL, Shri Manvendra Singh Gohil (Special Guest of the course) addressed the gathering with the emerging need of having allies to LGBTQ Community. A Keynote Address was delivered by the Chief Guest, Shri P .K. Malhotra, Former Law Secretary, Ministry Of Law And Justice, Govt. of India. He connected the dots of sexual orientation and fundamental rights guaranteed under articles 14, 15, 19 & 21 of the constitution of India. He talked about judicial interpretation of “constitutional morality versus public morality” in NAZ Foundation case to “transformative constitutionalism” in well-known S. 377 Verdict.

The overwhelming first session of the course commenced with the speaker, Mr. Harish Iyer, famous columnist and social activist.
The second session of the day, a Panel Session consisting of Ms. Riya Patel, Indo-American Trans Woman as a Speaker and Shri Manvendera Singh Gohil as a Moderator, gave a beautiful message to the LGBTQ community to lead a normal life and just in the normal world.
The first day of the Course was concluded by a Vote of Thanks Given by Prof. Shrut Brahmbhatt, Organizing Secretary of the Course.

Unitedworld School of Law, Karnavati University, observed the second day of the 2nd Edition of its, South Asia’s one of its kind, Module course on “Proclivity of Gender: Socio-Legal Approach to LGBTQ community”. The second day commenced with the screening of the movie “Evening Shadows” which depicted a journey of a boy to disclose his sexual identity and gain acceptance towards it.

The Guest of Honour Shri Manvendra Singh Gohil, Prince of Rajpipla, Gujarat & Founder of Lakshya Foundation gave a conceptual understanding of revealing the veil of the LGBTQ community.

It was followed by an interactive session with Sylvester Merchant, India HIV/Aids alliance where he discussed about transgender health and care – referring to transgender women as an umbrella term. An activity was carried out to understand the societal myths attached to LGBTQ community.

The second session was taken by Ms. Sonal Giani, Film-Maker & Activist who discussed the need of embracing the proclivity of gender of women. She talked about the awakening of the LGBTQ community through various magazines and books in 90’s.

This was followed by a session of Ms. Enakshi Ganguly, Co-founder HAQ: Centre for Child Rights, who conversed about child rights protection and challenges faced within LGBTQ community.

The day concluded with a Vote of Thanks delivered by Prof. Shrut Brahmbhatt, Organizing Secretary of the Course.

Unitedworld School of Law, Karnavati University, Gandhinagar observed the 2nd Edition of Module Course on “Proclivity of Gender: Socio-Legal Approach to LGBTQ community”. The third day of the course commenced with a session of Prof. (Dr.) Debarati Halder, Professor, Unitedworld School of Law, Karnavati University where the reading of Section 377 of Indian Penal Code and several Judicial Interpretations of the same were discussed.

The next session was conducted by Ms. Shefali Pandey, Founder – Flora Fountain and Co-Founder Mahila Manch. She, being an ally, focused on creating a safe environment for LGBTQ people on the campus to make a difference.

The Last Session of the Module Course was conducted by Mr. Nakshatra Bagwe, First and only openly Indian LGBT person to be signed up as the brand ambassador of “MOOVZ” a Global Social Network for LGBT community, also a Kashish coffee break audience choice award winner for his movie “LOGGING OUT”.

The Participants gave exam of the course and few of the high-grade receiver participants were given the certificates by Shri Manvendra Singh Gohil and Mr. Nakshatra Bagwe.

The sessions of the day concluded with a vote of thanks by Prof. Shrut Brahmbhatt, Organising Secretary.