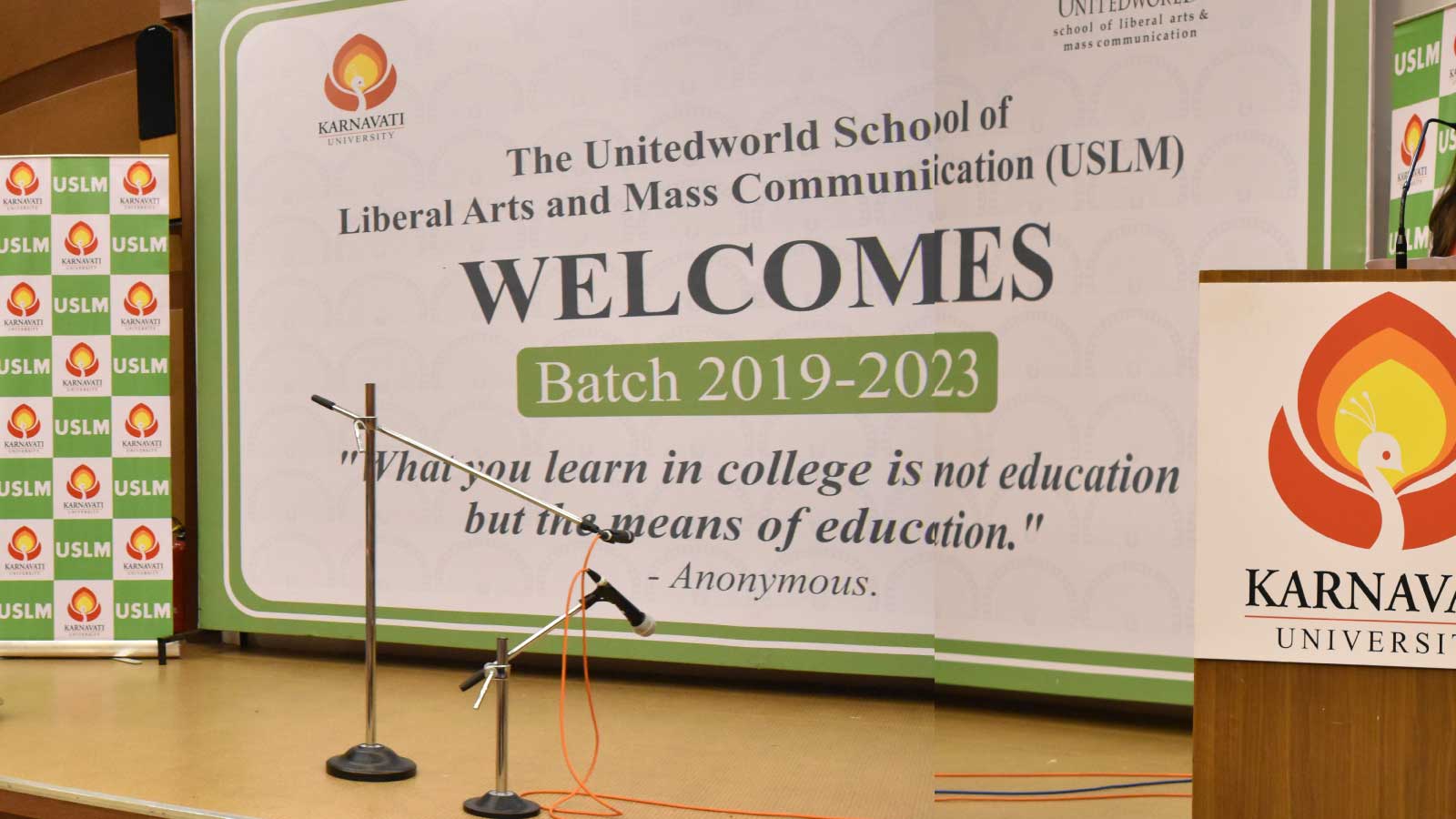 Unitedworld School of Liberal Arts and Mass Communication (USLM) welcomed it’s third batch today with a four-day orientation program. The festivities of day one began with the lighting of the lamp followed by the screening of a documentary created by the senior batches.

Prof. Chitra Unnithan addressed the parents and freshers to welcome them to the family of USLM. This was followed by a speech from the Dean Dr. Santosh Kumar who introduced all the faculty members.

The Provost of Karnavati University, Dr. Deepak Shishoo then gave an honest and heartwarming talk which left some parents in tears. This was followed by Prof. Preeti Das introducing to the new batch ‘Humans of KU’ an initiative by USLM and inviting on stage the Sadhu Brothers for a music performance. After a small photo session, everyone dispersed for lunch. The post-lunch session was a Q&A session between parents and faculty and other service heads.

On the second day of the Induction Programme, USLM hosted an exciting Q&A session with RJ Devaki moderated by Prof. Preeti Das. They covered topics such as increasing influence of social media, mental health, domestic violence, sexual abuse, what it is being a radio jock, theatre and it’s cathartic effect on life, and much more.

The session concluded with Devaki answering questions from the students and teachers alike.

The department of USLM was glad to have gotten the chance to have such an inspiring and driving personality come and interact with the students.

The orientation programme organised by Unitedworld School of Liberal Arts & Mass Communication (USLM) is one of the most amazing events conducted that help the new students to settle in and have a blast. The students who have freshly stepped out of their schools are exposed to various activities that try to open up their minds for a better future ahead.

As part of the Induction Programme, a super fun acting workshop was conducted by Mr. Kabir Thakor, a renowned theatre personality. The students were encouraged to do various interactive and fun-filled tasks by Mr. Thakor. The workshop mainly focused on making the students more aware of their surroundings and to help them open up their minds and have a more confident and free body language. It also focused on removing the element of stage fear from everybody’s minds. They were taught how to interact and communicate in the most effective ways with the least use of actions and words that would help them build up some great communication skills for a better future. The main element of communication as said by Mr. Kabir Thakor is nothing else but one’s own body. The workshop was one of the most memorable ones which ended with a small Q & A with the speaker.

The concluding day of the four-day induction extravaganza started on a sporting note and over 100 students — from Batch of 2017, 2018 and 2019 — jostled with each other and made most out of it while playing Sacred Games at the KU Sports Ground. They competed with each other in a host of team events. It all started with Tug to War, followed by Cap the Hurdle and Who Can Hit the Bar? and finally concluded with Ankle Run (3 People Run). Students were on display with best of their camaraderie and sporting capabilities amid the deafening cheers and noise from fellow batch-mates, seniors as well as juniors.