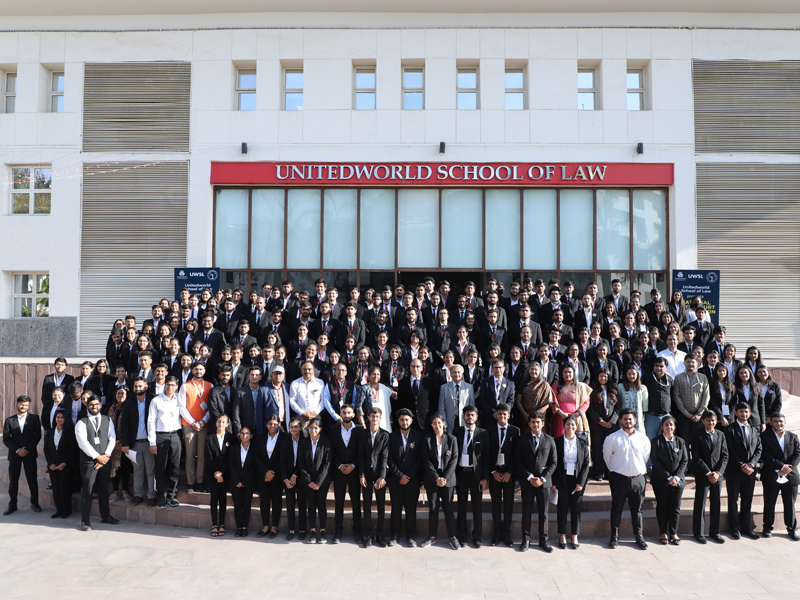 UWSL, Karnavati University inaugurated the 3 days National Moot Competition on April 28, 2022. The Honorable Judges arrived at the venue followed by a group photo with the participants and dignitaries. The Honorable Justice K. S. Jhaveri and Justice Anjaria commemorated the competition with the propitious lighting of the lamps.
Justice K.S Jhaveri enlightened the participants and the students of UWSL on the conduct of moot.
Furthermore while addressing the students Justice Anjaria interpreted Article 21 of the Constitution as “Right to enjoy parentage is part of personal Liberty”.
Preliminary rounds, conducted on the 29th of April, 2022, were organised in 6 distinctive moot courtrooms which were then followed by the quarter-finals. A very unique blend of hospitality was shown through a trip from the Karnavati University to Rani ni Vav, situated in Adalaj for the students coming in from different parts of the country. A blast of dances and happiness emerged in the Cultural Program which was orchestrated by the KUSGC committee were different societies of Karnavati University took part as one.
The semi-final and final rounds of the National Moot Court Competition were held on April 30.
Hon. Justice Kalpesh Satyendra Zaveri – Former Chief Justice, Odisha High Court and Hon. Justice Dinesh Maheshwari – Judge, Supreme Court of India were present as a guest. The valedictory ceremony started after the arrival of the guests and their warm welcome.
First, all the guests and contestants were welcomed by Dr A.K.S. Suryavanshi – Vice-Chancellor, Karnavati University. The guests were then honoured with a memento.
Hon. Justice Kalpesh Satyendra Zaveri then addressed the gathering in which he discussed how the contestants should be presented in the Moot Court. He then gave advice on how to prepare for the arguments.
The concluding speech was then delivered by Hon. Justice Dinesh Maheshwari in which he advised the students to keep on learning and also said to the teachers that their debt cannot be repaid. It is said that the debt of teachers can be alleviated only by learning. He also talked about the current issue of surrogacy.
The students of Nirma University were the winners. The winner was awarded a cash prize of Rs 40,000 and a trophy. Mr Shrut Brahmbhatt then thanked all the guests and contestants present.

Awareness Program on The Protection of The Avian...

The Centre for Research on Environmental Studies (CRES), UWSL, organized an awareness program on the protection of the...